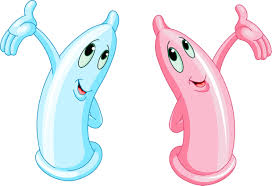 Should we do it without rubber? No!

So it should be clear answer to the question that is often accompanied by many “good reason” but that does not at all reduce the risk of becoming infected with sexually transmitted diseases. To fuck without a condom is and remains a major risk that could have bitter consequences. The worst excuses I have here summed up in a top 5 list:

First I’m allergic to condoms!
Aha, against all ?! No, no dear guys. We may think about the occasional suffer from a latex allergy, but not all. And even if all of a sudden would develop such an allergy, there are always alternatives. In our condom assortment for example there are an additional section with only non-latex condoms. This first poor excuse can you then this instant stop.

Second, it feels better without a condom!
Nonsense! There is also evidence to the contrary. Researchers say that girls can relax better because they do not need to worry – neither for an unwanted pregnancy or to become infected with various of diseases. This should have helped one and another woman to have an orgasm, an orgasm that she might not be received by an unprotected intercourse. Another distinct advantage is the condom humidity that makes penetration easier. Condoms with nubs and grooves also give the girl a further stimulation at the protected intercourse.
And the guys then? :) Yes, although they have sexual benefits of condoms! Quite often helps the condom when it comes to pulling out on the orgasm and prevent premature ejaculation. There are even endurance condoms, with integrate cock ring.
“They’re always so dry“. Nope! There are condoms with extra lubricant layer. “They are so thick that you do not know anything!” We believe this also no on, there are sensitive condoms for extra sensation.

3 I have no STDs!
Yes, now it is not so everyone walks around with a sexual health certificate. The problem is that many men and even women assume that everything is ok “down there” because it looks so. But many diseases of the genital area you can not see from the outside and they also have no significant symptoms. A chlamydia infection, for example, one can have undetected in the body for a long time and it can do that it is hard to conceive later.

5th You do not trust me then?
Aha! A manipulation attempts! A clear sign that the man has learned from us. 😉 But he will certainly not be praised for this! To drive this emotional thing is probably almost the worst of all the bad excuses. Especially when it comes to avoiding a pregnancy.  No, thank you! For we all know that even the first few drops of semen can transform into children. The appropriate response: a condom is no negotiating and real men do not meander. So, now it’s over with silly excuses. The condom should be the most important sexaccessorize and belongs to the basic equipment in the nightstand of every responsible adult!